A Closer Look at the Opioid Epidemic in Maryland

A Closer Look at the Opioid Epidemic in Maryland 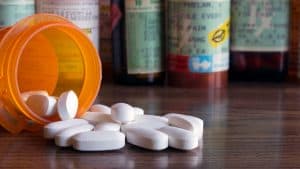 Prescription opioids are powerful pain killers which are used to treat moderate to severe pain and are often prescribed following surgery or injury or for cancer pain according to the U.S. Centers for Disease Control and Prevention (CDC). For the past few years, as pharmaceutical companies have pushed their products on physicians to prescribe these powerful drugs for the treatment of other types of pain, despite the risks for dependence, abuse, and overdose, an epidemic of opioid use and abuse has been taking place in the U.S. Patients who were prescribed opioid pain medications then become dependent on them, and when they are unable to get them from their doctors anymore, they seek alternative, illicit sources of prescription drugs to fuel their dependency and addiction.

The U.S. Department of Health and Humans Services (HHS) declared a public health emergency and  announced  a 5-point strategy to combat the opioid crisis:

Last fall, the Federal Drug Enforcement Agency (DEA) launched a “360 Strategy” in partnership with law enforcement and health care agencies to combat heroin and prescription drug abuse in the Baltimore area according to the Baltimore Sun.

People share extra pain pills with friends, teens abscond with their parents’ neglected pain pills in the medicine cabinet, and street suppliers sell them to people who desperately need them. While it might seem harmless to pass along some unused pain pills, it is illegal to possess prescription drugs without a valid prescription, and it is illegal to distribute a controlled dangerous substance (CDS) without a medical license.

Another way people who are addicted to pain medication can access those drugs is through doctor shopping, which involves going from doctor to doctor for different pain ailments and receiving several prescriptions. Finally, there are unscrupulous “pill mills,” which are doctors who will simply write prescriptions for pain medications for just about anyone who asks. Each of these practices is illegal, and law enforcement is cracking down in light of the current opioid epidemic that is taking its toll on society.

The National Institute on Drug Abuse (NIDA) describes opioids as a class of drugs derived from the opium poppy plant. Some prescription opioids are made from the plant, and others are made from a synthetic version.

The penalties for drug crimes in Maryland are quite severe on the state level, and on the federal level the penalties are even more severe. In Maryland, judges have wide discretion when it comes to sentencing, but drugs which have the greatest potential for abuse and misuse carry the most severe penalties. There are some mandatory minimum sentences for drug crimes, and depending on several factors, sentences can go as long as five years, heavy fines, and mandatory drug treatment programs.

Section 5-613 of the Maryland Criminal Code defines a drug kingpin as an organizer, supervisor, financier, or manager who acts as a coconspirator in a conspiracy to manufacture, distribute, dispense, transport in, or bring into the state a controlled dangerous substance.

What can I do if I am facing opioid-related drug charges?

If you have been charged with opioid-related prescription drug charges, it is critical that you speak with an experienced drug crimes defense attorney from Carey Law Office immediately. We will assert and protect your rights throughout the criminal justice process, and we will develop a strong defense on your behalf. We are not here to judge you or your choices. We are here to defend you and ensure that you are treated fairly under the law. Please call 301-464-2500 or fill out the contact form to schedule a consultation at our office in Bowie or Crofton.