You Can Be Charged with a DUI while Driving an ATV

You Can Be Charged with a DUI while Driving an ATV 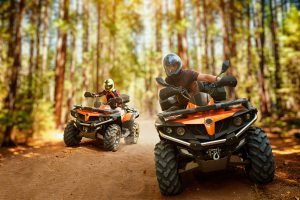 A recent case reported by NBC Washington brought home this point. The case involved a 24-year old man from Maryland who crashed his ATV while riding in Calvert County. There were two passengers on the vehicle. The two passengers were ejected from the ATV when the driver ran off the road and crashed into an embankment. A 20-year old front cargo passenger suffered head trauma and was reported to be unconscious. He was taken to a nearby medical facility where he was listed in critical condition. Another passenger, a 22-year-old man who was riding on the rear cargo, refused medical treatment even though he suffered minor injuries.

The driver was arrested after the sheriff’s office determined he operated the ATV while under the influence of alcohol. He was charged with DUI and other offenses.

In Maryland, there are two types of driver intoxication charges. The first is a DUI based on having a blood alcohol content (BAC) of .08 or more. If your BAC is .08 or higher, it does not matter whether your driving was impaired. The second is a driving while impaired (DWI) charge. You can be charged with DWI if your BAC is at least a .07, and there is proof that your driving was impaired. This proof can include your behavior behind the wheel, or your responses to tests.

Whether you were driving a car, an ATV, any gas-powered vehicle, or any electric vehicle, there are defenses to being charged with driving under the influence. For starters, the police must be able to show that you were the driver. If the police see you speeding, swerving, or driving recklessly, then they have means to pull you over, and proof that you were driving. If they only first see you after an accident has occurred, then they have to prove you were the driver by means other than first-hand observation.

The police also need to prove you were driving under the influence. Generally, they will first give you field sobriety tests. They will then give you a breathalyzer test unless you require a blood test. You have the right to refuse these tests, though there are administrative penalties for doing so. However, refusing the tests will deny the police (and therefore, the county or state) the evidence they want for their case.

If you’re charged with a DUI/DWI while operating an ATV, there may be defenses based on whether you were driving on a public road or a private road. Our lawyers fight to suppress the evidence against you. We hold the government to its burden to prove each part of a DUI charge beyond a reasonable doubt. To speak with an experienced DUI lawyer in our Bowie or Crofton office, call us at 301-464-2500 or fill out our contact form.