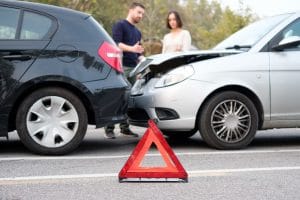 We have car insurance to protect ourselves (and others) financially in the event of an accident. It prevents us from having to pay out-of-pocket for medical expenses, vehicle damages, and other costs after a car wreck. One form of auto insurance available is uninsured/underinsured motorist coverage (UM/UIM).

Uninsured motorist coverage is meant to cover your car accident injuries without having to pay copays, deductibles, or other expenses when you’re injured by a driver without insurance. It can also provide benefits like lost wages and compensation for pain and suffering. Forbes estimates 12.4 percent of Maryland’s drivers are uninsured or underinsured.

Here’s how UM/UIM insurance coverage works. Imagine you’re in an accident that’s not your fault and the other driver either has no car insurance or an insufficient level of coverage for your losses. When your policy has UM/UIM coverage, your own insurance company will step in for the at-fault driver, providing the remainder of the settlement to which you’re entitled.

So, about that accident. Your injuries result in $100,000 in medical bills, but the at-fault driver’s insurance policy only covers $30,000 in accident coverage. With your UM/UIM coverage, you can make a claim against the other driver’s insurance company ($30,000) and your own ($70,000).

The requirements for uninsured motorist coverage in our state are as follows:

When should I take action on my UIM claim?

A recent case decided in the Maryland Court of Appeals addressed the issue of UM/UIM claims and when the statute of limitations clock starts ticking.

In Shilling v. Nationwide, the court was asked to decide when the statute of limitations begins to run on a UM/UIM claim:

In this particular case, the plaintiff and her attorneys negotiated with her own insurance company after an accident with an uninsured driver. After negotiations failed and they filed suit against the company, Nationwide sought for dismissal on the grounds that the statute of limitations had already passed. The dismissal was granted, but later reversed on appeal.

The prevailing opinion reads, “The Court of Appeals held that the statute of limitations in an underinsured motorist claim—i.e., when the insured institutes a contract action against its own insurer to recover underinsured motorist benefits—begins to run when the insurer denies the insured’s demand for benefits, thereby breaching the insurance contract.” The Shilling case clarifies that a UM/UIM claim is a contract action and, therefore, is governed by the contract statute of limitations, which is 3 years from the date of breach. The date of breach in a UIM context is NOT the date of the accident; it is NOT the date that the UIM carrier waives subrogation; it is not the date that the money arrives from the underlying carrier. It is the date upon which the UIM carrier “denies” the claim.

The attorneys at Carey Law Office provide legal guidance and advocacy for clients out of our offices in Bowie and Crofton. Don’t hesitate to call us for a consultation at 301-464-2500 or use our contact form to schedule an appointment.