The Risks of Interlock Ignition Devices

The Risks of Interlock Ignition Devices 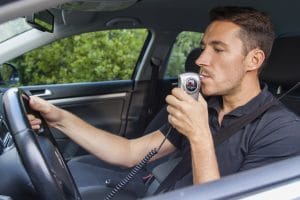 Maryland requires some drivers who are found guilty of driving under the influence or driving while intoxicated to install an ignition interlock device (IID) in their vehicle. Additionally, drivers can be required to use an IID due to an administrative suspension, or as part of their eligibility for a work permit license.

According to the Maryland Motor Vehicle Administration, drivers who participate in the state IID program will be required to use the interlock ignition device for:

The dangers of ignition interlock devices

IIDs are small devices wired into the vehicle. It is not just that the driver has to blow into the device with a sober test result to start the car; the driver must generally provide continual samples (called “rolling tests”) to keep driving. Those continuous samples are supposed to ensure that the same driver is behind the wheel once the car is started. They are also the root cause of the dangers.

A recent investigation by The New York Times found that there are major concerns about IIDs. While they appear to help prevent crashes, they may also cause crashes. The rolling tests required during the driver’s journey require that driver take a hand off the steering wheel so they driver can pick up the IID and blow into it for several seconds. If the driver doesn’t comply with this random test, the car’s horn honks and headlights flash until the drivers turns the engine off. If the driver drops the device and has to reach for it, which happened in a case the New York Times reported, the distraction can easily can an accident.

Thirty-four states require drivers with drunk-driving convictions to install the IID devices and more are likely to follow. The New York Times found dozens of cases where the IID devices played a role in causing a crash instead of preventing one. One driver blew so hard he blacked out and crashed into a tree.

When the National Highway Traffic Safety Administration proposed changing the rolling retests to tests that will be performed when the car is stopped on the side of the road, the IID manufacturers and others argued successfully that the rolling tests, even though they arguably cause driver distraction, are necessary.

At Carey law Office, our DUI and DWI defense team uses every legal and factual argument available to have the charges dismissed, to obtain acquittals or to negotiate just plea bargains We understand how unfair these devices are because they put the lives of drivers who are forced to use them at risk – EVERY time they drive their vehicle. In additional to contesting the criminal charges, we represent drivers at motor vehicle administration hearings to contest the imposition of a license suspension and to contest the requirement to use an IID. For help with all parts of a drunk driving charge, call us at 301-464-2500 or fill out our contact form to discuss your drunk driving case with an experienced Bowie and Crofton DUI defense lawyer.